The national standard for NPT (National Pipe Taper) taper pipe threads is ASME B1.20.1, the current edition has a date of 2013.

Taper pipe threads are made up of, diameters, flats, angles, and a taper. The diameters are located along the thread in both the hand tight and wrench tight sections. The flats are located at the tops and bottoms of the threads and are called crests and roots. The thread has an included flank angle of 60 Degrees. Also the thread is tapered, such that the diameters increase or decrease at a rate of 3/4 inch, per foot of length (or 1/16 per inch). 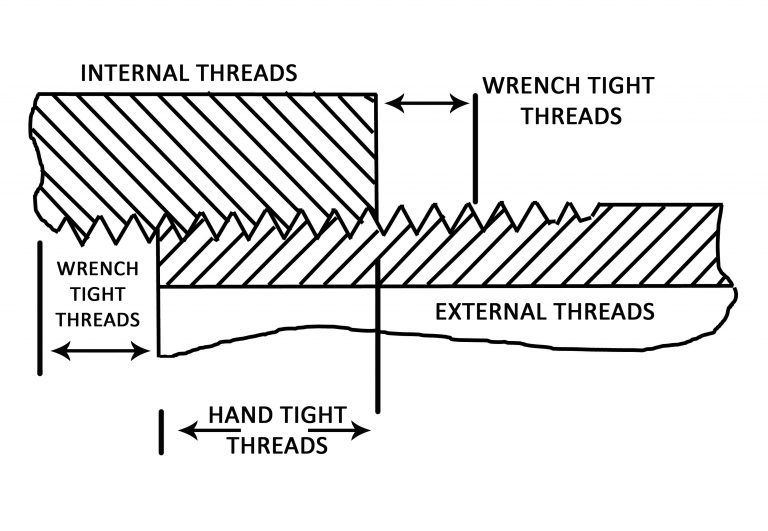 When producing an NPT thread, it is taken for granted that the tooling (tap drill, tap, thread mill, etc.)  will yield a thread that is in conformance requiring only a check of a few attributes. In the past when most NPT threads were produced by tapping, this was often true. But now, NPT threads are not only produced by taps, but by thread mills and inserts as well. It also seems, that the knowledge of selecting the proper hole size prior to producing the thread is not always correct.

Due to the different types of tooling, along with their different production processes, there has been an increase in the number of nonconforming parts produced in the industry today. Some real-life examples I’ve seen are, someone using a thread mill and forgot to program the taper, the thread produced came out straight instead of taper, but it gages properly using the L1 plug gage. Or, too large of a tap drill was selected and the L1 plug gage said the thread was good, but when assembled, it leaked like a sieve.

Historically, the commercially available gages, designed and use as instructed in the national standard ASME B1.20.1, called L1 Plug and L1 Ring have been used. These gages only evaluate some of the required thread attributes in only the L1 or hand tight portion of the thread lengths.

ASME B1.20.1 Para 2.7 states that, “Conformance to this Standard requires that all basic design dimensions be met (within applicable tolerances), including taper, thread truncations, lead, and thread flank angle over the L2 and L3 lengths.”

Its further stated, “Since the gaging systems prescribed in this Standard may not ensure conformance to these individual thread elements, supplemental gaging may be employed to evaluate conformance.”

The supplemental gages that can be used to evaluate the attributes that the NPT L1 plug and ring gage do not check, are special and not documented in the current ASME B1.20.1. They are similar to, but not the same as, the additional gages found in ASME B1.20.5 for NPTF threads.

The additional NPTF gages, evaluate the threads in the wrench tight/makeup threads known as L2 ring and L3 plug. In addition, the use of the L1 along with L2 or L3 gage evaluates the thread taper. There are also gages used to evaluate the flats at the tops and bottoms of the thread called 6 step crests and root checks.

Because of the increase in non-conforming parts being made today, due to the different types of tooling and manufacturing process, the use supplemental gages are becoming more and more popular.

So much so that the ASME B1.20.1 NPT pipe thread standard is looking at including them in the next revision.

So, if you are having NPT threaded parts or fittings fail, in service or rejected by your customer, there is no need to wait for the additional gages to be added to the next revision of the standard. We can provide them now as a special. These supplemental gages can make the difference between shipping good vs. bad parts. For more information, email us at sales@gwstoolgroup.com and find out how we can help you today!